I new Rob through climbing, rafting, and general outdoor adventures.  I have photographed him before for National Geographic Adventure, Outside, and other magazines and climbing websites, but I was still honored when he and his fiance trusted me to photograph a more formal event like their wedding in a city I had never been to before.

While Carin and I travel pretty extensively, somehow we had never made it to Cincinnati, Ohio.  We spent the months before the wedding researching locations, and we worked with some local vendors like the drivers and hotel staff to find some good locations, but what we found was a lot of photographers doing the same things.  We wanted to photograph in some of those historically popular locations, but Carin and I wanted to put our own spin on things.

Some of the different ideas we came up with were to use artificial lighting to reduce the archway at Ault Park to nothing more than a dimly lit background element. We did some traditional shots at the fountain at the Cincinnati Museum Center, but then we tried a very different pose by laying Janet down next to the water and focusing on the reflecting surface.

My favorite photos of the day were right after it started raining and getting dark. Many people would see rain as a bad thing on a wedding day, but it can make for some gorgeous photos. Carin ran down the street (in the rain) to the nearby Marriott Hotel and “borrowed” and umbrella.  When she got back to the museum we took Rob and Janet into the alley with the umbrella, and Carin held a flash behind them triggered by radio transmitters to get the shot in the rain you see below.

All in all it was an incredible day with a fun couple in a new city for us.  We love traveling anywhere in the world to photograph a wedding. 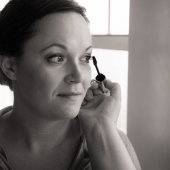 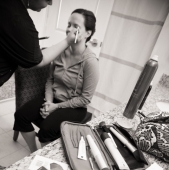 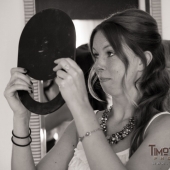 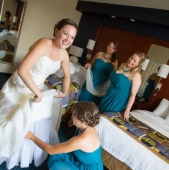 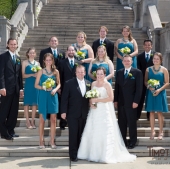 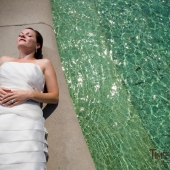 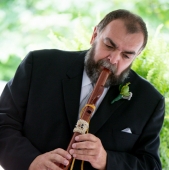 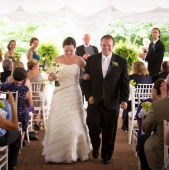 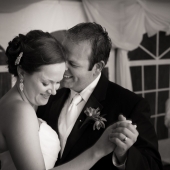 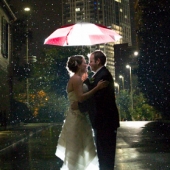