In anticipation of Pridefest happening in Denver this weekend, it got me thinking of how far the fight for marriage equality has progressed in the U.S. since I photographed my first same-sex marriage in California five years ago. When same sex marriage was legalized in California in 2008, my wonderful friends MJ and Pete were excited to begin planning their wedding, only to see the law change again later that year when Proposition 8 was passed, making it illegal again in California. They went ahead and continued their plans and had beautiful beach wedding surrounded by close family and friends.

In those five short years, we have seen tremendous progress for marriage equality in the country. Five years ago, only five states recognized same-sex marriage; all in New England. As of the time of writing this, 19 states  and the District of Columbia have full recognition of same sex marriage, three more states, including here in Colorado, have limited recognition of civil partnerships, and eight more states have had their bans overturned but are pending appeals.

In fact, North Dakota is the only state there there is not a pending legal case on the status of same-sex marriage, and many legal scholars are predicting that it could be legal nation-wide as soon as June of 2015, which is only a year away. For an up to date look at the current legal status, check out this page from GayWeddings.com. 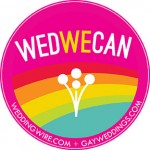 Of course, it really doesn’t effect what we do here. Since our start we have always believed in telling the story of love in all of its different forms. And our goal is to continue to photograph weddings and commitment ceremonies anywhere in the world. Join us in our support by visiting WedWeCan.com, or simply search for other gay-friendly wedding vendors in your area.