My wife, Carin, and I really enjoy traveling.  I wish I was one of those cultured individuals that could carry on a conversation in dozens of languages as I traveled the world.  Sadly, that just isn’t the case. What I can do is go is order beer in Mandarin Chinese, Nepali, German, French, Tibetan, Spanish (both Castillian and Mexican,) Japanese, and of course, several variations of English.

Beer might be one of humanity’s oldest inventions, dating back at least 7,000 years. and has been credited for the existence of civilization because it was safer to drink than water.  As it turns out this was likely due to the fact that water needed to be boiled to make the beer, thus they ended up unknowingly killing the microorganisms. (It’s easy for the chemist in my to geek out on beer.)

It is almost universally enjoyed in every civilization on earth dating back to Mesopotamian times. Each culture has its own variation on it from the darker and heavy ales of England to the light and crisp beers of Asia.  I may be biased, but I still think the best beers from from the United States, and particularly right here in Colorado.

Once, when Carin and I were in London, we stopped in at Ye Olde Cheshire Cheese pub in a dark alley off of Fleet Street. The Chesire Cheese has been in the same location for just shy of 500 years, and it definitely feels like it on the inside complete with gloomy rooms and coal burning fireplace. The cellars supposedly day back to the 13th century. While there we met a lovely couple from the country that was in London to see a play. After a beer at the bar, we ended up dining together, sharing stories, and even stayed in touch through letters for several years afterwards. 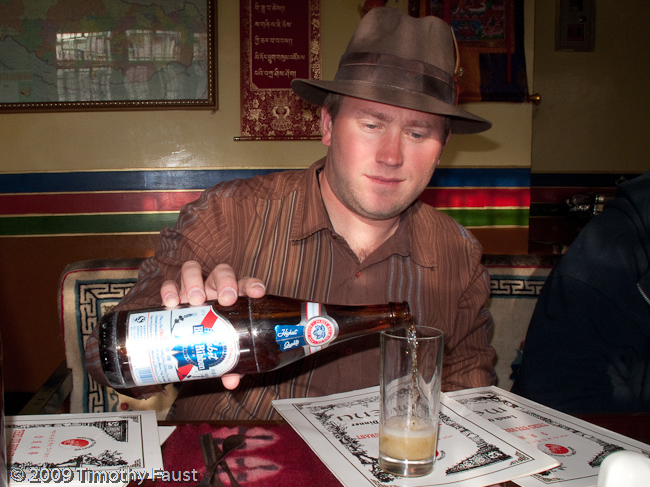 But I digress. When traveling, there is nothing better than sitting down with new friends over a glass of beer, and sharing stories and traveler’s tales. I remember playing pool in Tibet with our guide and a few locals while sharing some beer. I spoke almost no Tibetan, but my ability to order beer was enough to open the door to a fun night.  When you have games to play and beer to drink, you don’t need a common language to enjoy the company of new friends. 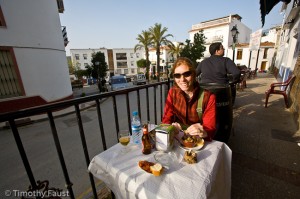 On another trip, Carin and I decided to take a drive through the south coast of Spain and visit some of the smaller out of the way villages.  We had no plan, no guidebook, just a map and the desire to get lost in the countryside. In some ways, Spain was more difficult than Tibet, because I speak just enough Spanish to get in over my head.  The thing is, I can walk into a restaurant, say hello, ask how the weather is, ask for a table, and order beer with just enough of an accent to sound like I might speak the language.  Unfortunately, my entire 3 years of high school Spanish was exhausted in that initial exchange. When our waiter asks us something else, I am left completely clueless.  I think I need how to say the following phrase in Spanish:

My apologies, but I think I may have misrepresented my ability to speak your language. May I have a beer?

If you ever run in to Carin and I while we are out traveling, pull up a chair and join us. The first round is on me.