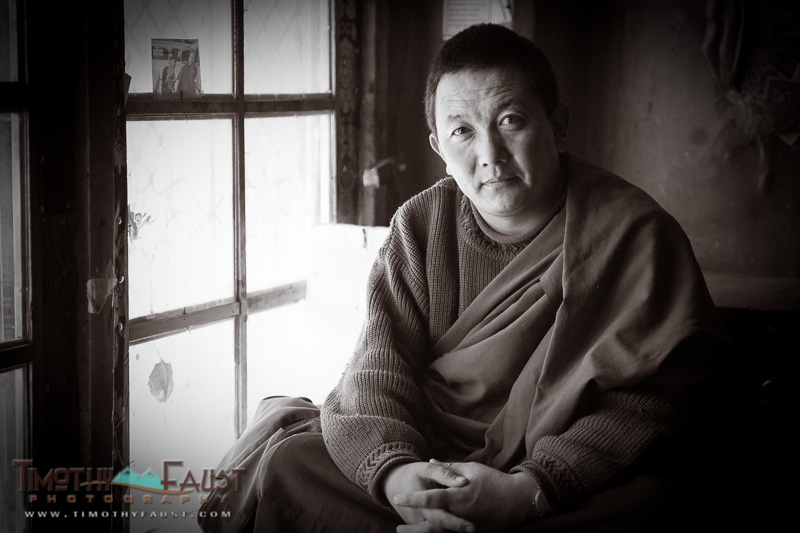 Many of you mostly know me as a wedding photographer.  Many years ago, I also worked quite a bit doing adventure travel photographer for magazines like Outside and National Geographic Adventure. While spending nearly two months traveling in Asia, I made a number or portraits throughout Tibet, China, and Nepal.

Sometimes a photograph takes a lot of planning and preparation. Other times it is just a matter of just seeing it and making it happen. I saw this monk sitting by a window inside of a monastery in the Potala Palace (the Dali Llama’s winter home) in Lhasa, Tibet. The light coming into the monastery through a dirt covered window.  It made an excellent softbox.  I couldn’t ask the monk directly if I could take his picture since I didn’t speak that much Tibetan, so I gestured to him and to the camera, and he nodded his approval.  In order to achieve the Rembrandt lighting I was looking for, I just took a small step into the room so he turned his head away from the window just enough to allow the small triangle of light to fall on his cheek bone.

This is actually the second image I made.  In the first one, the monk was smiling just a little, but I felt like it didn’t quite fit the mood of the lighting.  Instead just as I lowered the camera, I made this second image in which he had a much more natural expression on his face. That is a “trick” that I have used repeatedly in my career, especially when photographing weddings. Many times the expression in the initial image looks forced, while a split second later, it is much more relaxed and natural.