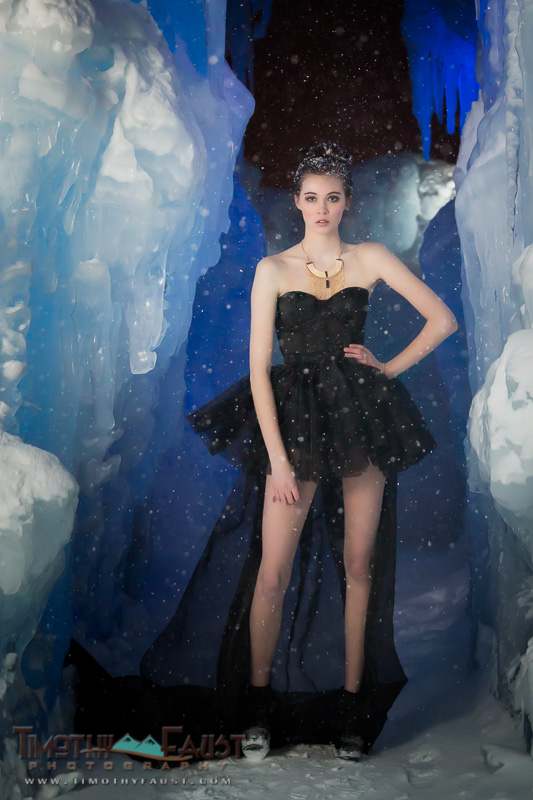 The Breckenridge Ice Castles are an amazing venue to photograph in. Every year as soon as it gets cold, they start adding water a little at a time, and allowing it to freeze into beautiful formations.  This year they also added colored LED lights inside the ice itself to further add to the surreal beauty of the place. When this model contacted me about doing a winter photo shoot in Breckenridge, I knew this had to be the place.

There were two complicating factors during this shoot.  First, it was really cold and snowing. Second, the shoot took place during normal operating hours, which meant having to move around a lot of other people.

Dealing with the snow and cold took a team effort. Her family was there to help keep wrap her up to keep her warm between shots since the temperature was approaching 0°F. I think the snow actually contributes to the coolness (pun intended) of this photo, but you cannot use a on camera flash when photographing in rain or snow because it will reflect too much light back towards the camera. Instead the flash needs to be positioned at a minimum of a 45° angle from the camera.

Which brings me to my next point; the people. Because it was open to the public, that meant not being able to use tripods and light stands. Everything needed to be kept super simple, small, and mobile. For this, I had one of her family members use a Canon 580EXII flash attached to a Pocketwizard radio trigger. This allowed me to fire the flash remotely from my camera, and all I had to do was have the person who was holding it, aim it in the right direction. In this case, that mean bouncing the flash off of a nearby wall of ice in order to get the softer looking light on the model.

Lastly, having the right tools for the job makes a huge difference. For most of my images today, I am using the Canon 5D Mark iii. It has unsurpassed high ISO performance that allows me to photograph in low light situations like this without sacrificing image quality. Just a few years ago, a shot like this would not have been possible, because cameras were just not sensitive enough to pick up the LED lighting in the ice without resulting in unacceptable levels of noise in the image.